We are learning French!

The Year 2 children from Elm,Willowand Holly are well underway with their language learning and what a great start they’ve made.

They have learnt how to greet one another politely; how to count to 6 and some finger rhymes. They have been listening to and joining in with some French songs as well as listening to lots of stories. They are busy learning the names of some animals at the moment and playing lots of games to help them practise and memorize this new language. Shortly, we will begin learning some Christmas vocabulary.

Here are just a few pictures of the children singing and dancing to ‘If you’re happy and you know it.’ (Si tu as de la joie au coeur). 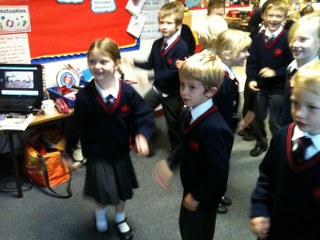 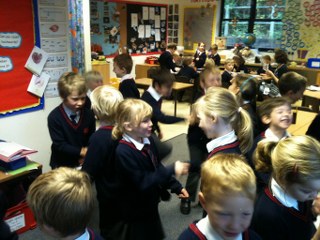 Year 3 and 4 are learning Spanish!

Here are some pictures of some of the children dancing to ‘Juan Pequeño Baila’. 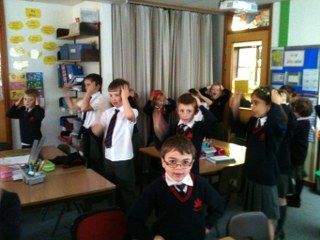 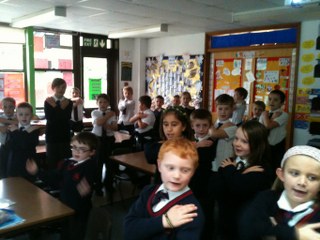 What a great term we’ve had so far in lower Key Stage 2. The children are proving real stars with their Spanish learning. They know lots of different ways to greet one another and have been listening to, dancing to and joining in with many different songs to help them learn new vocabulary.

We have also learnt how to say the vowel sounds in Spanish and to help us practise and memorise them we sang them to the Macarena!

The children have learnt how to count to 10 and found out a little about customs surrounding The Day of the Dead in South American countries. We listened to a very catchy tune with dancing skeletons which we all enjoyed so here is a link to the video on youtube: http://www.youtube.com/watch?v=CYyRibaMQoA

Or you can type  babelzone los esqueletos into google

Year 5 and 6 and a Museum Mystery!

At the beginning of our French lessons this term we received an email from a Madame Blanche who works at a small museum all about the 19th Century inParis. She informed us that she had been hearing about the children’s quest to find the talisman and thought that there may be a piece of it in her museum. She requested a description and sketch of it and so the children have been busy finding out the vocabulary they need in order to do this. They have read jewellery descriptions, ‘stealing’ words and phrases that might be useful. They have developed their skills in using a glossary and a dual language dictionary and are just about ready to write their descriptions.

Alongside this, the children have been learning about famous French people from the 19th Century and about some famous inventions from this period. They are now trying to use adjectives to describe some of these inventions.

Why not have a look at the BBC primary languages site.